This 1995 Civic EX Coupe was bought in 2003, then 8 years old, for $1200. This example had 155k miles and was considered to be “done” by its previous owner. While this vehicle was considered to be at the end of life by the previous owner, the vehicle was mechanically solid- it ran well and had no major mechanical issues, like most well-maintained, higher-mileage Hondas.

The new owner of the vehicle was Todd Marcucci, who bought it to turn it into a budget race car for autocross and track use, to represent the brand. After a thorough inspection insured that there were no serious issues, the vehicle received a basic tuneup (plugs, spark plugs, wires, and flush of all fluids). With the vehicle at a solid starting point, the transformation began. The objective was to make the car as competitive as possible, with as little cost as possible. 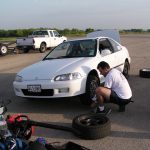 The stock 14” steel wheels with hubcaps were immediately swapped for a few different sets of alloy 15” wheels (one set to drive to track, one set to use at the track) and much wider and stickier tires (205 for the street and 225 for the track). With the grip much improved, handling was addressed. The stock springs and shocks (which had never been changed) were swapped for a set of Koni 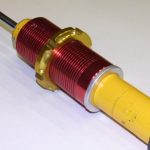 Sport (“Yellow”) shocks and Tom’s coilovers with 450 lb/in front and 350 lb/in rear springs. These coilover sleeves were copies of the Ground Control ones, and Marcucci Motorsports developed a spring perch eliminator based on the desire to make a clean installation of these coilovers on this vehicle (similar to the Ground Control coilover sleeves designed specifically for Koni shocks). 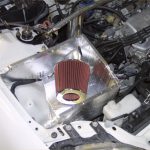 With handling addressed, power was next. In keeping with the budget theme, a generic short ram intake was purchased off of eBay and a cold-air heatshield box constructed around the filter element. Air was directed from below the passenger headlight through an opening cut in the front bumper skin, providing cold intake air to the short ram. Often neglected, the intake tube itself was wrapped in a reflective foam wrap, providing insulation for the aluminum piping. Keeping cost down, a stainless generic header, high-flow catalytic converter, and exhaust (again, from eBay) were fitted. Not related to power, but to responsiveness and reliability, the stock clutch and flywheel were changed out for a Spec Stage 5 3-puck ceramic clutch and a lightweight Fidanza flywheel. 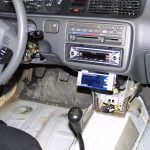 Finally, an Apex’I VAFC was installed, and the VTEC point and MAP sensor signal corrected to help smooth out the air/fuel ratio to maximize power. In all, the stock 125 HP, which translated to about 105 wheel HP, was bumped up to 118 wheel HP, with as much as a 20 HP and 20 ft-lb increase mid-band, where it is most important. While these are not great power levels, this made quite a difference in acceleration to the stock 2400 lb curb weight. 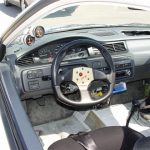 The final preparation of the vehicle came in the form of interior modifications. The stock interior and trunk was completely stripped, and the stock front seats swapped for Momo units (used, in keeping with the low cost theme), Sabelt 5 point harnesses were installed, the stock glass sunroof was replaced with a carbon fiber 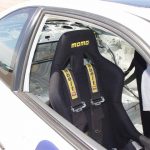 plug, and the steering wheel replaced with a much smaller and thicker Momo unit. In all, the changes made a dramatic impact on driver comfort, control, and feel, and the weight savings of the changes amounted to a nearly 120 lb weight reduction. Without making a commitment to investing heavily in big power adders, such as forced induction, reducing curb weight is critical to improving acceleration and handling.

Once finally completed, this Civic performed very respectably at local autocrosses and track events, and could frequently be seen lapping what were originally much faster vehicles when new. In all, there was only about $4500 invested in the vehicle, including the purchase price. 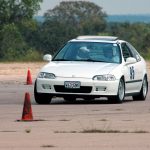 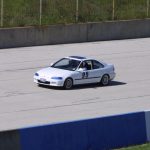 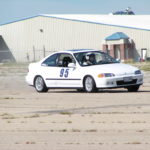 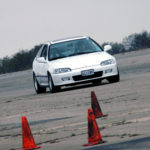